In 1847, fifty or so families helped found the community in Osijek, Slavonia’s main city. A school and synagogue were quickly built, presided over by Rabbi Samuel Spitzer, author of religious, cultural, and historical books. His son, Hugo Spitzer, became a pioneer of Zionism in Yugoslavia at the turn of the twentieth century.

The community consisted of 2600 members in 1940, 90% of whom were killed in the Jasenovac, Djakovo, and Loborgrad camps in Croatia, as well as Auschwitz.

At the headquarter of the city’s small Jewish community, a museum houses the remains of objects rescued from the main synagogue, destroyed during the war. In Osijek’s main square, there is a monument dedicated to the victims of the Shoah. A  Jewish cemetery can also be found in the city.

One of Osijek’s most prominent figures is Branko Lustig. Born in this town in 1932, he was deported during the Holocaust to Auschwitz. Most of his family members were murdered. After the war he studied acting in Zagreb.

Lustig later became a director and producer, participating in these roles in about 100 films, and was particularly active in promoting Croatian cinema. Among the major films he produced were Sophie’s Choice (1982) and Gladiator (2000). Residing for the most part in Los Angeles, in his later years he spent increasing amounts of time in Zagreb, where he was made an honorary citizen of the city for his « great contribution to the culture of a democratic society, to movie art and to understanding between peoples ».

Branko Lustig, Gerald R. Molen and Steven Spielberg co-produced Schnidler’s List (1993). At the Academy Awards ceremony, Spielberg stressed the need to listen to the voices of survivors and encouraged teachers to welcome them to share their experiences with students. 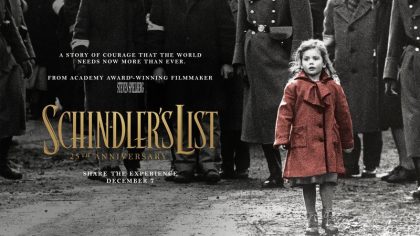 When Branko Lustig took the podium, he began by recalling the number tattooed on his arm during the Holocaust, and then said, with great emotion « I’m a Holocaust survivor. It is a long way from Auschwitz to this stage. I want to thank everyone who helped me come so far. People died in front of me in the camps. Their last words were ‘be a witness of my murder’. Tell to the world how I died. Remember. Together with Jerry, by helping Steven make this movie, I hope I fulfill my obligation to the innocent victims of the Holocaust. In the name of the six million Jews killed in the Shoah and other victims of the nazis, I want to thank everyone for acknowledging this movie. »

In 2011, Branko Lustig participated in the March of the Living, celebrating his bar mitzvah at age 78 in front of the camp where he was deported and from which he was liberated at age 13. The New York Times has released a video report, which can be seen at this link, showing Branko Lustig repeating the prayers before arriving at the site of his painful past.

His American success never made him lose his sense of values. Thus, answering Interviewsmagazine about where his house is actually located, Branko Lustig spoke about Zagreb. That despite the Shoah, returning to the city where he studied film is important to him. That he knows the places and the people there, marked by the human touch and the sincerity of the relationships. That he does not forget but forgives, speaking to the new generations of Zagreb. He directed the Zagreb Jewish Film Festival, not for the 300 Jews who still live in the city, but as he says, to “share a spirit of tolerance and learn from the past so that it does not happen again”.