Founded in 1329 by Bodgan I, the principality of Moldavia pitted all those who coveted it against one another -Turks, Austrians, Poles, Cossacks and Russians – for over five centuries.

Deprived of its northern section, Bukovina, annexed by the Hapsburgs in 1775, and Bessarabia, its eastern province later yielded to Russia, Moldavia gained them back when greater Romania was formed after the First World War.

At the end of the Second World War, however, it lost them all once more. 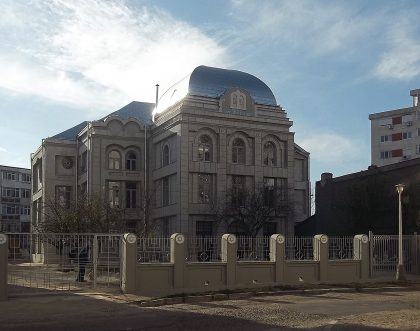 Whereas, in Wallachia, the early waves of Jewish immigration were overwhelmingly Sephardic, those that settled in Moldavia were Polish and Ukrainian-born Ashkenazic Jews.Warmly accepted by Prince Stephen the Great in the latter half of the fifteenth century, they were nonetheless segregated from the Christian population. In the seventeenth century, they were massacred  by Bohdan Chmielnicki’s Cossacks during their revolts against Polish rule. Over the nest two centuries until the time of unification, Jewish community institutions truly began to take root, both in the capital, lasi, as well as the many jewish townships that had multiplied under the Phanariot princes. In 1941, Romania joined the war on Germany’s side, which led to pogroms in lasi and Dorohoi. The Jewish populations of Bessarabia and Bukovina were deported to the other side of the Dniester, where they were victims of hunger, illness, and mass executions perpetrated by the Romanian army.

The art of appeasement

If the Jews of Wallachia were sharp and efficient, the Moldavian Jews liked to weigh their words and take their time before making major decisions. Of a dreamy, ironic temperament, they proved on every occasion their rare spirit  of conciliation, as demonstrated by a joke told on the train from Bucharest to lasi, the capital of Romanian Moldavia.

“Once upon a time, in Piatra-Neamt (one of the hubs of Moldavian Judaism), there was a young rabbi who loved to play chess with the owner of a local kosher butcher’s shop. One day, the rabbi disappeared, only to return half a century later. Flabbergasted, his chess partner, now aged and skinny, called out to him:

-But where have you been for all these years, rabbi? Why did you abandon us?

-I was up there, on top of the mountain, said the rabbi smiling.

-And what does a rabbi do over fifty years, all by himself, up there, on top of a mountain? the frustrated butcher grumbled, trying to keep his calm.

-Oh, well, to be exact, way up there on top of the mountain, a rabbi reflects on his life, replied the rabbi.

-And what conclusion did you reach? the butcher exclaimed, now at the point of losing all composure.

Stroking his beard, the rabbi answered:

This time, the butcher could not contain himself:

-In the name of …! Fiftey years alone on top of the mountain to reflect, only to come up with such a stupid answer? Have you gone mad?

The rabbi stopped stroking his beard, and said in a low voice:

-Fine, if you insist, life isn’t like a fountain!