Homeland of Maimonides, Cordoba was under the Arab Caliphate of Abderahman III the greatest Andalusian juderia. Under the Muslim rule, the Jewish community lived in harmony with the conquerors who, to save their armies, entrust to the Jews the administration of Seville and Cordoba.

The history of the Jewish community of Cordoba follows that of the Arab occupation and Almohad and Almoravid invasions which limited the freedom granted to the Jews when they weren’t massacring them, causing the escape of the community towards Granada. Nevertheless this period from the 10th to the 12th century is the most splendid golden age of Sephardic culture in Spain.

In 1236 Ferdinand III took over the city and granted a number of privileges to the Jews but required a tax of 30 gold coins each year. Under the reign of Ferdinand III, violence began to reach its climax with the sermons of 1391 and the many forced conversions. In 1492, the community complied with the decree of the Catholic Monarchs and emigrated largely to Portugal and North Africa.

Born in Córdoba in 1138, he was also known as RaMBam, acronym for Rabbi Moses Ben Maimon. Lawyer, philosopher, the most eminent thinker of medieval Judaism, doctor and astronomer. His contribution to the religious literature of Judaism, and Jewish thought in general is immense, both in the field of Halakhah and in that of philosophy . The centerpiece of his legal work remains the Michneh Torah (the second thorah). This is the most compelling compilation of Jewish law ever written. The moreh nevukhim “guides the lost”, constitutes a peak of the Jewish aristotelianism of the Middle Ages. The philosophy of Maimonides is also expressed through his works of Halakhah and the responsa he wrote as a decision-making rabbi. He was, indeed, the highest rabbinic authority of his time.

Following the seizure of power by the Muslim dynasty of the Almohads, who were known for their religious fanaticism, the family of Moses was forced to flee in 1148. After a period of wandering, they moved to Fez in Morocco in 1160. It was there that Maimonides was trained as a doctor. In 1165, Maimonides and his people left for Egypt and Palestine. They first stayed in Alexandria, then in Fostat, the old city of Cairo. Maimonides was financially helped by his brother David, a rich merchant who died in 1169 in the Indian Ocean. This allowed the young man to devote himself exclusively to study. Then he began to practice medicine and in 1185 he became the doctor appointed to the court of Vizier Saladin Al Fadil. In 1177 he was appointed head of Fostat’s Jewish community until his death in 1294.

Extract from the encyclopedic dictionary of Judaism, Cerf, Paris 1993.

The Jewish quarter extends near the mosque and the episcopal palace. Enter through the Moorish Gate of Almodovar. The names of squares and streets, given in the nineteenth century, allude to this past: the place of Maimonides, Juda Levi and Tiberias, etc. The most important monument is the  synagogue, miraculously preserved. It was built, or rebuilt, in 1315 according to the inscriptions on the building. After the expulsion, it was turned into a hospital and in 1588 became the headquarters of the Brotherhood of Shoemakers in the city. Rediscovered by an archaeologist in 1884, it was immediately declared a historic monument and restored. It is reached by a small patio and a modest door underlined by a brick arch. The interior, Mudejar style, has a square shape (6 m by 6, approximately). The decoration based on plant motifs is very rich. It is accompanied by inscriptions, especially around aron ha-Kodesh: quotations from Isaac Moheb ben Efraim, who would have completed this temple in 1315, taken from the Book of Psalms written in red on a blue background. It is, after Toledo, the most spectacular symbol of the Jewish presence in Spain. The building is also a UNESCO World Heritage Site since 1994.

At the  archaeological museum of Cordoba you can admire a Jewish tombstone found in 1958 in Lucena. It was embedded in the wall of a house in this city. It reads: “Rabbi Amicos, sleep in peace and rest in peace until the arrival of the consoler announcer of peace at the gate of Salem and who predicts the good news of peace. May your house be at peace.

Finally, you can complete your visit of the Jewish Cordoba with a detour in the cultural center, bookshop and shop  Casa de Sefarad, which organizes exhibitions, guided tours of the judería, concerts and conferences. 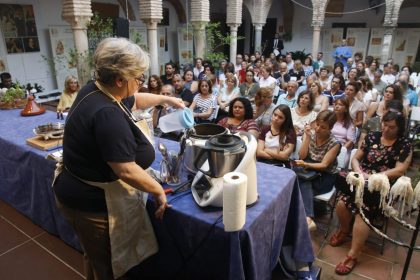 Marta Puig Quixal: A coordinated action among many cities all over Spain to recover the traces of the Sephardic culture. An essential culture within all our different roots but despite this reality, it remains the most unknown. Therefore, the main mission focuses on the research of our own Spanish History through the history of the families that once lived all around the cities.

Another key mission is to connect physically and emotionally with the Sephardim around the world. Those who maintained this culture and tradition alive during the five centuries it was originally hidden and forgotten. 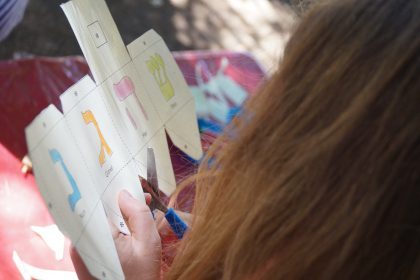 What will be the main theme of this year and what events are organized around it?

We have been developing three big areas of work: First, designing Cultural routes. Which was done by getting our cities ready to be visited, marking the places, forming our guides, promoting our destinations. Then, we have developed an Educational project, providing tools to teachers which enable them to have a simple but effective idea of who were the Sephardim. Finally, we’re focusing our efforts on the Cultural presence. This is encouraged by the organization of permanent cultural events, which is a great way to connect with Spanish citizens. It is probably time to intensify the institutional work as we accidentally have become the ones who represent a culture by the places where they lived. We are the streets, the doors, the landscapes of many diasporic families. Can you share a personal anecdote about a previous event?

I prefer to highlight how emotional and touching my job is, even for a non-Jewish like me. I go abroad often, spending time and efforts on promotional and cultural activities. I always look forward at the great chance to meet the Sephardic communities wherever it may be. I personally think that Sephardic Diaspora constitutes one of the most incredible historical events of all times. And the feeling of belonging to a place (Spain), that ancient generations left, sorry, were forced to leave centuries ago, is unbelievable. 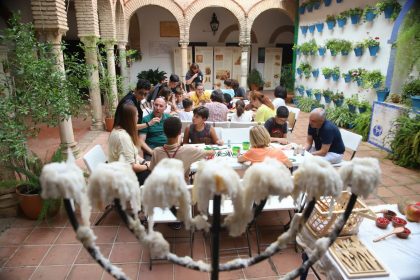 Which particular place related to Spanish Jewish Heritage do you feel should be better known?

It is impressive that more than five centuries trying to erase every Jewish sign on our heritage and history was not enough to discourage the enthusiasm of rediscovery by Jews. If we all agree the Jewish preserved heritage today is not one of the most impressive from a preservation point of view, we have to admit that the storytelling connecting all our destinations makes it highly emotional, exotic. It all becomes very interesting for both national and foreign visitors. Any of the 21 quarters that we have recovered deserve a visit, and all should be better known.