The independent city of Frankfurt has welcomed Jews since 1150. However, from 1460 until their emancipation at the end of the seventeenth century, the Jews were confined to Judengasse (alley of the Jews), a ghetto that became quickly overcrowded.

In 1720, moneylender Meyer Amschel Rothschild, his wife, Gütele, and their eighteen children moved into one of the houses in the area. Meyer’s success and the dispersion of his large family across Europe gave rise to the powerful financial network of this celebrated family.

Unfortunately, the bombings of 1945 and the reconstruction of the city center after the war have wiped away all traces of this former jewish quarter. Out of the 11000 Jews that lived in Frankfurt before the Shoah, very few survived.

At the beginning of the 1960s, the municipality of Frankfurt decided to consecrate a museum to the history of the city’s Jewish population. It was installed in the Rothschild Palace on the banks of the Main River, a classical building erected in 1821 and designed by the Paris-trained architect Johann Friederich Christian Hess. The palace was acquired in 1846 by Baron Meyer Carl von Rothschild, head of the German branch of Rothschild banking. He had it renovated and redecorated to house his prestigious collection of furniture, paintings, and gold artworks.

In 2021, the Goethe University in Frankfurt inaugurated a department of Jewish studies, named after Martin Buber and Franz Rosenzweig. The inauguration took place on the 143rd birthday of Buber, who had once taught at the university before being expelled by the Nazi regime.

When in 1987 the city of Frankfurt started to work on vast areas near the former Judengasse (“alley of the Jews”), it discovered many ancient houses belonging to the Jews who lived in what is considered one of the oldest ghettos in Europe. Founded in 1460, as many as thousands of Jews used to live behind those walls. Thus, the extension of the Jewish Museum was aptly named, after the heritage discoveries,  the  Museum Judengasse. The Judengasse presents a permanent exhibition “Mazel and Broche” covering this era.

The Jewish Museum is divided in two parts. First, the  Judisches Museum, which opened its doors in 1988. The 30th anniversary of its opening was celebrated in 2018 with many events and cultural gatherings. It was renovated and expanded in order to welcome more people and events. The Judisches Museum reopened its doors in October, 2020. The historical Rothschild-Palais has been renovated and complemented with a new building erected by the Staab architects. Facilities at the museum include access to archives, a library and a café. Theater performances and concerts of Jewish music are also frequently held here. 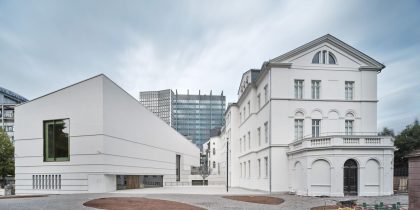 The Museum has a new permanent exhibition on three floors: “We are now”. Its aim is to showcase the Jewish life and culture of this historic center that Frankfurt represents. You can see the evolution over time, the impact of historical events on daily life and Jewish practice.

By following individual journeys, such as that of the Anne Frank family and that of the Rothschilds, whose historical roots are in Frankfurt. Two families who have marked history in very different ways. But also the fate of artists and scholars such as Moritz Daniel Oppenheim, Martin Buber, Samson Raphael Hirsch, as well as the great figures of the Frankfurt School, Max Horkheimer and Theodor W. Adorno. An impact in both directions, since these artists, intellectuals but also Jewish actors in the economic and scientific life of the city influenced life in Frankfurt, even after the Holocaust.

The most spacious and prestigious synagogue of Frankfurt is the  Westend synagogue, affiliated to the liberal movement. Its Majestic dome is an architectural masterpiece. Two years were needed to build it, as it was inaugurated in 1910. Quite rare at the time, women were not required to sit upstairs, but were seated on the same level as the men, each on one side of the ground floor.

The synagogue survived not only the pogrom of November 1938 (the only synagogue which did so among the four major ones of the city), but also the bombing of the city by the allied troops. On the eve of Rosh Hashanah 1945, Rabbi Leopold Neuhaus organized prayers with the few survivors and some American Jewish troops who were stationed in Frankfurt.

In 1948, the city, as well as the region, undertook to finance a vast renovation of the synagogue. Since 1950, prayers are conducted on a regular basis in the synagogue. It welcomes the Stibl, as well as the Beit Hamidrash of Westend. The latter following the hassidic rite. The place also hosts an egalitarian mynian under Rabbi Elisa Klapheck.

The Westend synagogue being thus an important example of different streams of Judaism practicising under the same roof. The second major synagogue of Frankfurt is the  Baumweg synagogue. A few other synagogues welcome ponctual services.

Other curious aspect of Jewish life in Frankfurt, the city has 12 Jewish cemeteries. Three of them being connected today to the local community. The most ancient cemetery is located on Battonnstrasse, near the Museum. It enables to confirm the presence of Jews in Frankfurt since at least 1150. The old cemetery can be visited after a request at the Museum where a key is given in exchange for an ID card.

Interview with Dr Mirjam Wenzel, Director of the Jewish Museum Frankfurt concerning two amazing exhibitions: the new permanent exhibition celebrating the Jewish presence in Frankfurt from the past to the future, as well as the amazing exhibition on the theme of revenge, exploring its perception in the Bible, the work of Tarantino (Inglourious Basterds), that of Marvel (including the character Magneto) and other surprising references.

JGuide Europe: You are currently showing “Revenge. History and Fantasy.” What is special about the exhibition?

Dr. Mirjam Wenzel: Basically, everything. It is the first exhibition in the world that explicitly deals with the various aspects of revenge in Jewish cultural history. Our exhibition spans an arc from acts of revenge in the Thorah to thoughts of retribution after the Shoah and relies on images and narratives of popular culture. Originals on display include the painting “Judith and Holofernes” (on loan from the Uffizi Gallery), the baseball bat from the film Inglourious Basterds and comic books. The exhibition draws its emotional power from the calls for revenge by people who were murdered during the Shoah. You can get a first impression in my short guided tour through the show: Revenge: History and Fantasy – Jüdisches Museum Frankfurt (juedischesmuseum.de). The catalogue (Hanser Verlag) is available in English, as well. Due to popular demand, we have extended the exhibition until October 3 – so we would of course be delighted to welcome you and your readers to the museum!

What has been the reaction to the exhibition?

In the last room of the exhibition, our archive of the present, includes a feedback wall. This wall is a continuation of the dialogue between me and the curator about the subject of the exhibition that is put on display throughout the whole space. In the last room we as the visitors about their thoughts and feelings. Many thank us for an interesting and informative exhibition that proves that marginalized minorities do not necessarily develop a victim mentality. Others are concerned with the question of how they themselves would react, if their families were threatened, or worse. Most commented that they had not heard of Jewish acts of revenge until now. In General, we have received an overwhelming positive response to the exhibition – both on this wall, on Social Media and in the press.

Can you share a personal anecdote about a previous Festival?

In 2016, the Jewish Museum Frankfurt opened its Pop-Up Boat on the Main river on the European day of Jewish culture. The Pop-Up Boat was a space for encounters that included a Pop-Up exhibition, participatory displays, a Tel Aviv beach bar, lunch talks and workshops introducing the issues and themes addressed by the new Jewish Museum, such as: What is Jewish art? What are family ties and how long do they hold together?

In the evening it was a platform to experience contemporary Jewish culture with concerts, readings, panel discussions, performances and film screenings – cheeky and serious, conscious of tradition and provocative, unsentimental and confrontational. Right before the opening of the Pop-Up Boat it was raining heavily. There seemed to be almost no place on the boat where one could stand without getting wet. But all of a sudden, right before the Lord major appeared for the opening ceremony, the sun came out and we were rewarded with a beautiful rainbow right above the boat – an almost biblical experience.

Can you tell us about the Museum’s exhibition “We are now”?

“We are now” is the title of the new permanent exhibition in Rothschild-Palais dedicated to the Jewish experience of modern life in Frankfurt from emancipation until today. Displayed on three floors of the Rothschild-Palais, it offers different approaches to Jewish history and culture in one of the main centers of Modern Jewish life Europe: Starting in the presence, the permanent exhibition tour outlines major historical events and conflicts, reflects on Modern changes of traditions and rituals, and tells individual stories in a mixed media setting, from a Jewish perspective. A special focus lies on renowned fine artists, like for example Moritz Daniel Oppenheim, and scholars like Samson Raphael Hirsch, Martin Buber, Max Horkheimer and Theodor W. Adorno.

Jews shaped the cultural, economic, scientific and social development of Frankfurt decisively, even after the Holocaust. Based on their own experience of migration they gave distinction to municipal cosmopolitanism as well as to the European meaning of Frankfurt as a city of publishing, scholarship, trade and finances.

In order to offer a personal approach to this extraordinary history, a special focus of the exhibition is dedicated to Jewish families, like Anne Frank’s family whose history is presented exclusively with original objects and documents of family inheritance or to the world-famous Rothschild family whose success story is being presented in the historical setting of the representative rooms they once lived in.

Which particular place related to Frankfurt’s Jewish heritage do you feel should be better known?

The Börneplatz synagogue. Inaugurated in 1885, the sandstone building offered a room for 800 prayers observing the conservative liturgy. It was situated right at the end of the former Judengasse beside the marketplace. During the Weimar Republic the synagogue became the epicenter of what is called the Jewish Renaissance and attracted a lot of intellectual rather secular Jews like for example Martin Buber, Franz Rosenzweig, Siegfried Kracauer, Samuel Agnon. Destroyed in the November pogrom of 1938, the synagogue left hardly any traces in the memory of the city, today.