The Irish Jewish Museum is housed in the old synagogue on Walworth Road. This place of worship was the center of Jewish life in the capital until the movement out to the suburbs and a gradual shrinking of the population led to its closure in the 1970s. In 1985 Chaim Herzog, former president of Israel, gave a speech inaugurating the new museum. It houses archives and objects and depicts the distinctive characteristics of the community. On the first floor, visitors can admire a kitchen ready for a typical Shabbat at the turn of the twentieth century. On the second floor, one can admire the well-preserved synagogue.

“I, Rudolph Virag, now resident at no 52 Clanbrassil Street, Dublin, formerly of Szombathely in the kingdom of Hungary, hereby give notice that I have assumed and intend henceforth upon all occasions and at all times to be known by the name of Rudolph Bloom.”

52 Upper Clanbrassil Street (Dublin 8) is the birthplace of Leopold Bloom, one of the two protagonists of Ulysses, the 1922 masterpiece by James Joyce (1880-1941). Bloom was the son of a Hungarian Jew who emigrated to Dublin and changed his name. A plaque on the wall recalls his presence here. Ulysses also mentions Emorville Square, Lombard Street West, and Saint Kevin’s Parade. Bloom has become such a popular character that Ireland’s main literary festival is named after him: Bloomsdays is held every year on 16 June. For more information, contact the  James Joyce Centre.

The synagogue on Adelaide Road, which was consecrated in 1892, closed in June 1999. Another,  Greenville Hall, built in 1920, is now home to a high-tech company.

The Greek columns and Stars of David that decorate the exterior can still be admired.

Three active synagogues remain: the  Dublin Hebrew Congregation, and the  Machzikei Hadass Synagogue; the time of services can be obtained from the Jewish Community Centre at  Herzog House..

The Dublin Jewish Progressive Congregation (DJPC) has been active since 1946. Apart from the regular services, they also have a cheder for children. They welcome many tourists who have to contact them first via mail.

The last burial at  Ballybough cemetery was in 1908, but the Jewish community has continuously employed a guardian to take care of the site since then. An inscription on the guardian’s lodge, at the entrance to the cemetery, reads “Built in the year 5618”.

Dublin’s Jews are buried at Dolphins Barn cemetery, not far from the Donore Avenue Bridge over the Grand Canal. 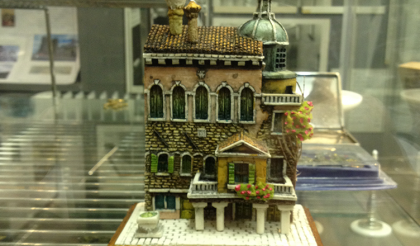 Jguideeurope: Could you give us a few examples of the Museum’s collection of memorabilia related to the Irish Jewish communities and their contributions to present day Ireland?

Yvonne Altman O’Connor: The museum is situated in the last remaining old synagogue and is preserved as it was in the early 1900’s.

There is a large memorabilia section related to the social history of the community containing photos, letters, documents and artefacts relating to the sporting, artistic and social activities of individual members. There is also an original kosher kitchen and a display of books by and about Irish Jewish authors and themes.

Which underrated place linked to Jewish heritage in Dublin is of interest to visitors?

The Jewish Museum is the main source for all Jewish heritage. The two cemeteries are also of interest. 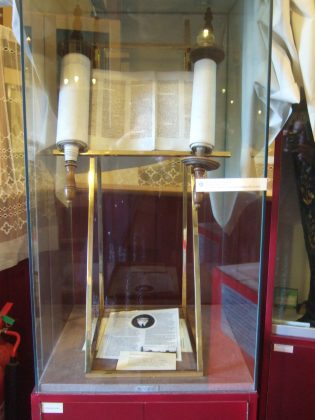 You organized an event on Leopold Bloom’s legacy. How has such a representation Evolved since the creation of the character?

There is more emphasis on the Jewish context of the story and character of Leopold Bloom highlighting antisemitism and zionism in Ireland at the time.

Also further research has been revealing information about how Joyce gathered his knowledge about Jewish characters and Judaism is coming to light.

What’s your next exhibition about?

We currently have a display of Jewish textiles and an exhibition on the diaspora.

The Museum can be visited or contacted via this link