In the fourteenth century, Padua was one of the great centers of medieval Judaism, with a celebrated rabbinical academy where students from all over Europe came to study. These students were also attracted to Padua by its very old medical school, the only one to accept Jews as students. The Venetian conquest in 1405 obliged the Jews to sell their homes and lands and limited the interest rates they could charge to 12%. In 1509, the conquest of the city by Maximilian of Austria’s German mercenaries included the sacking of the Jewish quarter. When the Venetians retook the city a few months later, new pillaging ensued. Until 1560, the city celebrated this victory on the seventeenth of July with three races, one of which required the Jews to ride donkeys through the town as they were mocked and insulted. The ghetto was created in 1601, confining more than 600 people in a handful of narrow, dirty streets. The ghetto was eliminated only in 1797.

Situated in the narrow streets near the Piazza delle Erbe, the former ghetto has kept much of its original appearance. At 9 Via San Martino e Solferino, where the offices of the Jewish community are located, stands one of the four gates to the ghetto crowned with the lion of Saint Mark. A little further away is Via delle Piazze, once the center of the quarter with two old synagogues, which have sine disappeared.

In 1525, the Great “German” (Ashkenazic) Temple was opened in the Corte Lenguazza, the primary synagogue of the city. Remodeled and embellished in 1683, the synagogue began using the Italian liturgy in the nineteenth century, when the large Baroque central platform was removed. Damaged by fires first in 1927 and later in 1943, when it was torched by local Fascists, only the temple’s magnificent Baroque marble aron escaped the flames. In 1955, it was dismantled (weighing approximately forty tons) and reinstalled in Tel Aviv in the Yadan Eliahu Synagogue.

The Italian Synagogue, erected in 1548 on Via San Martino e Solferino, has remained the ultimate testimony to Jewish life in Padua. The aron and bimah face each other from the long sides of a rectangular hall measuring 60 ft. x 23 ft. Four columns of whiteveined black marble surround the beautiful seventeenth-century aron.

In the Alberto Toscanelli on bearby Via Arco, one can still see a chimney decorated with a dove, the emblem of the Salom family. This was the headquarters of the rabbinical academy. The street with its tall, narrow houses evokes what the ghetto looked like in the past.

One can also visit a section of Padua’s seven Jewish cemeteries, which are located on the edge of the city. The oldest cemetery is close to San Leonardo and dates back to 1384. The tomb of the famous rabbi Meir Katzenellenbogen (1482-1565) is located here and continues to attract pilgrims. The cemetery of Via Codalunga includes the grave of Isaac ben Juda Abravanel (1437-1508), minister of finance for Alfonse V of Portugal and, before that, for the kings of Spain.

Interview of Simonetta Lazzaretto, Responsible for the Jewish Heritage Museum of Padua

Jguideeurope: The Jewish Heritage Museum of Padua is a bridge between the ancient and the modern. Can you tell us about the synagogue where it is located?

Simonetta Lazzaretto: The Jewish Heritage Museum is actually located in via delle Piazze 26, off Piazza delle Erbe, in the Ghetto area. The former Ashkenazi Synagogue was burned down in 1943 by Italian fascists and remained in ruins until the end of the 1990s when it was restored with the help of the Local Authorities. Four and a half years ago, the local Jewish Community decided to create a Heritage Museum where the precious manufactured objects from the previous former Synagogues could be shared with the town.

The exhibition displays objects from the family tradition, e.g. candelabras, spice holders, Passover Seder dishes and objects connected to Synagogue rituals. Just to mention some of the most precious ones, a 15th century Mamluk Parokhet, embroidered materials and Torah Sefers. 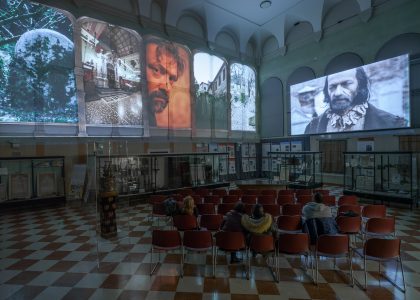 You can also live a multimedia experience inside the museum itself thanks to two video installations by Denis Brotto. A short and captivating documentary offers a historical overview on the Jewish Community of Padua and a 50-minute one helps you delve into the life of ten eminent characters: “Generation comes and generation goes” is the account of the women and men who were part of the Community and epitomised it. They come to life to tell their stories through the sites, which represent Judaism in Padua. Their words are ideally addressed to all the people who are meant to take over from the past generations and hand down their inheritance to the new ones.

What has the work of Denis Brotto brought to the sharing of Padua’s heritage?

Denis Brotto’s part in the creation of the Museum has been fundamental. His cultural background and his deep awareness of feelings and emotions have been a major contribution to the life of the museum itself.

The two video installations he created have played a significant part in the narration of the life of the Jewish Community, from Jehuda Mintz to the present. As he says in his text The Jewish Heritage Museum of Padua: ”I felt the need of an original, unusual way of telling this story. I was looking for a combination of narrative, visual and auditory solutions, which could highlight the coexistence of characters and ages still present with us here… In this process of building memory, each character is asked to talk to the others but also to the present, our present, from which we address them to find some continuity, with the purpose of strengthening our connexion with tradition… The sound track‘s foundations are based on the famous history of Jewish music, reviewed through contemporary pieces and sounds.” 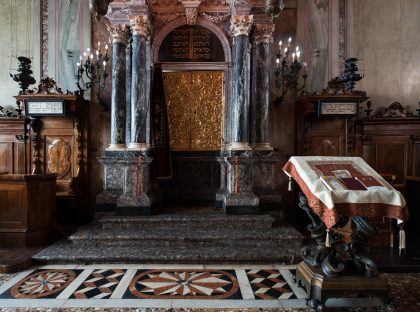 Can you tell us about the Rabbinical boarding school and why Padua welcomed important rabbis?

In 1829, a Rabbinical boarding school was created in Padua, then part of the Austro-Hungarian empire. It is still considered the first modern rabbinical school and a model for most important similar institutions. Among the illustrious teachers are rabbi Samuel David Luzzatto, Lelio Hillel de la Torre and Eude Lolli.

As Del Bianco and Maddalena Cotrozzi claim in their article “Il Collegio Rabbinico di Padova” (published in La Rassegna Mensile Di Israel, vol. 57, no. 3, 1991, pp. 359–380. JSTOR, www.jstor.org/stable/41285859), “the creation of the Rabbinical Boarding School in Padua for rabbi candidates in 1829, after nearly ten years of preparation and discussions, was an exceptional event for the time. It was in fact the first municipal institute of the kind and because of his originality it seemed contrasting the traditional training process of rabbinical studies…”

Synagogue and Community Center of Padua