The history of Vienna’s Jewish community can be divided into several distinct periods, with the community itself settling in two specific neighborhoods: in a section of the city center in the First Bezirk and in Leopoldstadt in the Second Bezirk.

In the Middle Ages, the first Jewish community in Vienna established itself in what came to be known as the “Judenstadt” in the heart of the city not far from the cathedral, inside a perimeter roughly delimited by present-day Seitenstettengasse, Hoher Markt, Jordangasse, and Judenplatz.

The Gothic-style synagogue, similar to the Alteuschul in Prague, was first mentioned in 1294 as the Schulhof, named after the spot on which it was built (now the Judenplatz) in immediate proximity to the Court.

In addition to the Judenplatz, there is a nearby different square called Schulhof, bordered by a Gothic church resembling the former synagogue and perhaps an exact replica of it, designed after its destruction in 1421.

Between 1360 and 1400 the Jewish community ranged from 800 to 900 people, representing 5% of Vienna’s total population. In 1421, however, they were all either expelled or forced to convert.

In 1624, the Jews were granted a new neighborhood, the Unter Werd, located along Taborstrasse in present-day Leopoldstadt, on the other side of the Danube.

A new syngogue was built there; Leopoldskirche church stands on the site today. The Unter Werd ghetto, which included 132 houses, offered the Jews a certain amount of protection until it was destroyed and its residents exiled in 1670.

Beginning in 1782, with Joseph II’s edict of tolerance, Jews settled in Vienna once more. In 1826, a new synagogue by architect Josef Kornhäusl was built on Seitenstettengasse, marking the community’s effective return to its historical center of Jewish life of the Middle Ages.

In 1858 another synagogue, the Leopoldstädter Temple, was built across the Danube not far from where the former Unter Werd ghetto once stood in Vienna.

This attracted Jewish settlers to the district, later called Mazzesinsel, or “Matzoh Island”. Since the 1980s and 1990s, the Jewish community has once again concentrated its activity in these two historical neighborhoods.

In the city center, the Jewish Museum, Judenplatz Museum, and the synagogue are all well worth a visit (a single ticket allows access to all three in a day).

Vienna, site of the world’s first Jewish Museum in 1897, opened the current one in 1990. This  museum, whose purpose is to act as a link between Jews and non-Jews, also serves as a window on the rich but lost world of Viennese Judaism. The first floor houses two permanent exhibitions. The first displays objects of Jewish liturgical life, while the second -the creation of New York artist Nancy Spero- illustrates Vienna’s Jewish history. The second floor is for temporary exhibits, and the third provides a retrospective on Jewish life in Austria through twenty-one painting. The fourth floor, in a room called the Schaudepot, “depot expo”, is given over to hundreds of religious objects recovered after Kristallnacht. It resembles the back room of an antique shop.

The library here tops those of all other Jewish museums in Europe. It preserves 25000 volumes in German, Hebrew, Yiddish, and English.

Located at the museum entrance is a bookstore well stocked in catalogues and texts (in German). On the same floor, Teitelbaum Café, among the city’s best, serves Austrian kosher wines, Viennese pastries, and vegetarian dishes.

A monument by London artist Rachel Whiteread commemorating Austrian Jews exterminated during the Shoah was placed in the Judenplatz (former Schulhof) in October 2000. The piece consists of a square, closed room, the outer walls of which supports shelves loaded with books.

The  Judenplatz Museum in the Misrachi House is located behind the monument and has also been open since 2000. Its focus is the Jewish quarter of the Middle Ages, particularly the founding of the medieval Gothic synagogue (Or Zarua), rediscovered in 1995 during an archaeological dig. Two videos and computer-animated displays provide information about medieval Jewish life. At the museum entrance, a room equipped with computers allows visitors to look up the names of 65000 victims of the Shoah.

The Stadttempel, Vienna’s synagogue of 1826 by architect Josef Kornhäusl, was the only temple that avoided destruction during Kristallnacht. Kornhäusl, highly respected in his time, specialized in theaters; not surprinsingly, then, the Stadttempel was designed like a small theater or Italian-style Baroque opera house, with a circular shape, a stage, three balconies, wings, and a foyer. It lacks only dressing rooms and ushers.

The Judengasse, a little street linking the Seitenstettengasse to the Hoher Markt, was a main street throught the Jewish quarter of the Middle Ages, as it names indicates.

For a deeper understanding of old Jewish Vienna, you need only stroll through Leopoldstadt, an island in the Danube that was, in former days, so populated with Jews  it was called Matzoh Island. Here and there along its streets, you will come across plaques marking former Jewish community establishments.

The Leopoldstädter Tempel stood on the street bearing the name Tempelgasse, at number 5. A plaque a four large columns by architect Martin Kohlbauer evoke the former synagogue. In its place today is the  ESRA, a center dedicated to counseling the victims and witnesses of the Shoah and racism.

At number 7 on the same street sits the  Sephardic Center, which brings together associations of Jews from Bukhara, Georgia, and their respective synagogues.

Before the war the Turkish Temple, for the Jewish community from the Ottoman Empire, resided on Zirkusgasse (Circus Street). Built in 1885 in Moorish style, it was destroyed in 1938. Residential housing was built in its place in the 1950s. A strange plaque declares: “Gesunde Wohnungen, glückliche Menschen” (clean apartments, happy people), while another , smaller one, hidden beneath a balcony, notes: “The Turkish Synagogue was located here”.

The Orthodox Temple Polnische Schul, constructed with three naves, stood at 19 Leopoldgasse but was also destroyed on 9 November 1938.

It is not possible to fully grasp Jewish Vienna without stopping by the haunts of the major Jewish intellectuals who helped make Vienna one of Europe’s most modern capitals at the turn of the twentieth century. These figures include Sigmund Freud, of course, as well as Arnold Schönberg, Joseph Roth, and Martin Buber.

The address 19 Bergasse is legendary. This was  Freud’s house, a spot of cult interest for all those fascinated by the history of psychoanalysis. While the furniture is original, his famous couch was moved to London when he emigrated there in 1938, a year before his death.Freud’s house features a museum including special exhibitions, the Library of Psychoanalysis, and archives.

Born in 1874, Arnold Schönberg founded the Vienna School along with Alban Berg and Anton Webern; he was a composer of twelve-tone music.

After converting to Protestantism in 1898 (just as Mahler had converted to Catholicism, the “entry ticket to European culture”), he returned to Jewish faith in 1933 in Paris, with Marc Chagall as his witness.

He then emigrated to the United States, where he dies in 1951, aware that he would gain true recognition only after his death. The  Arnold Schönberg Center opened in 1998, and it preserves manuscripts, scores, correspondence, and archives that are available for examination.

Founder of the “philosophy of dialogue”, militant, author,  Martin Buber was born in Vienna in 1878. Although he spent his childhood in Galicia, he later returned to Vienna. Both perceived as an important figure in the history of zionism and in the reconciliation of cultures, Martin Buber left important writings. After moving to Israel, he pursued those goals. He died in Jerusalem in 1965.

On Rembrandtstrasse sits the house where  Joseph Roth lived. Born in Brody, Galicia, in 1894, Roth completed his studies in Lemberg (Lvov) and Vienna.

The collapse of the Austro-Hungarian Empire was highly traumatic for him, both as a geopolitical event and on a personal perspective. Joseph Roth’s work blends social criticism with transfiguration of the Austrian monarchy. And the impacts on Jewish life on the shtetls of his childhood, caught betwenn historical changes and evolving situations regarding their freedom. Novels that made Roth famous include Job, the Story of a Simple Man (1930), The Radetzky March (1932), and The Emperor’s Tomb (1938). He died in exile in Paris in 1939.

Encounter with Michaela Vocelka, curator of the Jewish Museum of Vienna, concerning the exhibit dedicated to Simon Wiesenthal’s drawings 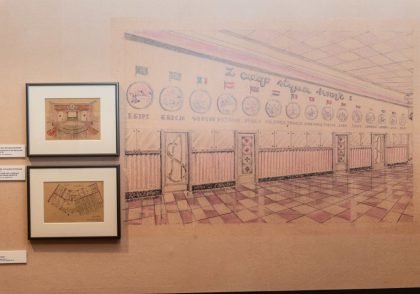 Jguideeurope: How did the idea for this exhibit come?

Michaela Vocelka: The sketches for a coffeehouse in Poznań, made by Simon Wiesenthal in the Mauthausen concentration camp, were offered to the Jewish Museum by the son-in-law of Edmund Staniszewski.

After the museum had acquired them, the idea arose to present these previously unknown drawings to the public in an exhibition.

Was the public surprised to learn about this important encounter between Wiesenthal and Staniszewski?

Not only about the sketches and the exact circumstances of their creation, but also about the relationship between Simon Wiesenthal and his fellow inmate Edmund Staniszewski was little known. For the visitors, the drawings are especially impressive because they document the struggle for survival of Simon Wiesenthal in the Mauthausen concentration camp and they also give an insight into his training as an architect, which was a little explored part of his biography. 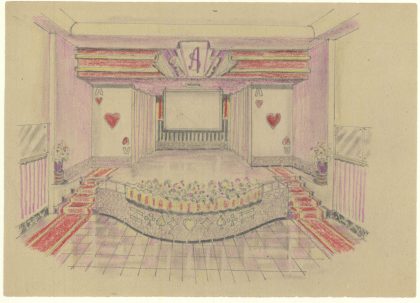 What happened to Staniszewski after the war and did they stay in touch?
Staniszewki returned to Poznań in Poland soon after his liberation from the concentration camp Mauthausen but could not realize his dream of “Café As” there, because the building he owned, was confiscated during the communist era.

Simon Wiesenthal and Edmund Staniszewski lost sight of each other until 1960, but afterwards their renewed friendship lasted until Staniszewski’s death in 1984.

What place linked to Jewish heritage in Vienna would you recommend to visit apart from the museum?

Discover the destroyed synagogues of Vienna by following the light sculpture “OT”.

In the commemorative year of 2018, light symbols were erected in 16 Viennese districts at the 25 former sites of synagogues that were deliberately destroyed beyond recognition during the November Pogrom in 1938 to commemorate the places, as well as their history. www.lichtzeichen.wien