The last real shtetl in western Europe, Antwerp is known for its Orthodox Jews and its diamonds industry. Barely twenty years ago, approximately 80% of Antwerp’s Jewish population used to make a living from the diamond industry. More than half of the world production of diamonds passed through these few streets near Centraal Station. The diamond centers, which can be visited, also served as meeting places where ongoing debate took place over the social, cultural, and political issues affecting the Jewish community.

The story of the Jews of Antwerp seems like taken out of a novel. With its peak, golden ages, but also the impact of WWII and the economical crises.

Also baptized the “Jerusalem of the North” for its ashkenazi synagogues and yeshivot, Antwerp’s Jewish community was nevertheless founded by Sephardim in 1526, Marranos from Portugal. Belgium having through the centuries been at the center of its powerful neighbors’ wars, Jewish life varried according to the willingess of the empires ruling the city, going back and forth from tolerance, expulsion and civil rights inclusion. The attachement of Flanders to the Netherlands before Belgian’s independence in 1830 and the development of Amsterdam and Antwerp’s ports encouraged a stronger link to Dutch ashkenazi Jews.

From 151 Jews in 1829, the city was the home of more than 35000 a century later. This was mostly the result of the arrival of Eastern European Jews. They took an important part in the diamond industry’s boom. So much so that during WWII, Cuba welcomed Jewish refugees from Antwerp who opened a diamond cutting factory.

The golden ages concern two generations. One after the war and then their children in the 70s and 80s. During that era, kids attended Jewish schools in big numbers, actually more than in any other city in the world apart from the ones in Israel. Schools who weren’t only yeshivot. On the contrary, Tachkemoni, a mainstream Jewish school which at its peak welcomed about a thousand students, strictly follows the Belgian curriculum and offers on top of that a very high level of Jewish studies. Jan Maes, a former director of Tachkemoni, is conducting now a remarkable task in finding the names and photographs of victims of the Holocaust still not fully identified. A monument now stands in Antwerpen, honoring the memory of the Holocaust victims.

Apart from the gatherings during the Holy days at the synagogue and in the diamond district, Jews from Antwerp have lived mostly in two different entities. The orthodox Community on one side and on the other the rest of the Jews, ranging from atheists to the disciples of the Rav Kook, who all shared many moments. At school, but also in the youth movements (Hashomer Hatzair, Hanoar Hatzioni and Bne Akiva) and the sports club Maccabi.

Maccabi enjoyed its glory days in multiple eras and sports. Its football team in the 30s (one of its best players keeping the surname Arsenal, a team he cherished, even at work) which remained a Division 4 team until the 1990s, its water polo team in the 50s – 60s and its tennis club which produced two national champions.

The Romi Goldmuntz center hosted cultural and social activities for many decades after the war, welcoming most weddings and bar/bat mitsvoth. As most of the schools and synagogues, it was located in the heart of Antwerp, on the Nerviersstraat, near the Belgelei avenue. This building, due to the diversity of activities, has welcomed all generations. The evening room, where galas and parades were also held, was on the ground floor, behind a café-bar and a room where bridge lessons were given, one of the favorite activities of the Jewish community in Antwerp. On the 1st floor, a restaurant which welcomed in particular many schoolchildren at noon and a sports hall where the ping pong tables were set up at noon as entertainment after the meal and before classes resumed. And next to it a room for karate and judo lessons. On the upper floors, a children’s playroom, a theater, a library and an exhibition hall. And even in the basement a nightclub which was also used for teens celebrating their bat mitzvah and bar mitzvah in a less formal setting than the great room.

The diamond industry evolved a lot during the last twenty years, with the disappearance of the diamond cutting factories and the different specializations now taking over in the sector. This evolution motivated many Jews to work in other fields or choose other destinations.

If the Romi Goldmuntz center is now closed, as are cultural landmarks such as the Kahane bookstore near the train station, youth movements and schools still play an important part of the Jewish life in Antwerp. As do the orthodox institutions. The recent generations have provided national figures in many field, especially theater.

There are six Ashkenazic rite synagogues in Antwerp. The biggest is  Romi Goldmuntz. The Shromei ha-Das (Guardians of the Law) Synagogue, with over 6000 members, and the Israelitische Gemeente van Antwerpen, founded in 1904, represent the city’s Jewish community.

Next come the more Orthodox communities, united under the  Mahzikia organization. This includes all the current in the Hasidic movement, such as the Satmar, the Gourer, and the Sanzer. In Europe, only London’s Stamford Hill can offer comparable diversity.

The Sephardim meet in their synagogue near the Diamond Exchange. Antwerp’s  Portuguese-rite Israelite Synagogue (Beth HaKnesset Portugeese) includes some 300 families and has been swollen by the arrival of numerous Israelis. A plaque on an outside wall commemorates the victims of the 1981 terrorist attack, which was claimed by a Palestinian group.

The Kosher pleasures of Yiddish Town

Yiddish Town, also known as “Pelikaan”, from the name of one of its main streets, is located around Centraal Station. Here, at the back of the houses or in arcades, you can find various restaurants and delicatessens usually bearing the name of the family owners.

Apart from USA Pizza on the Isabellalei, none of them have views onto the street, but all offer prayer books. Even if most jewellery stores there have closed and Jews moved to the other side of the railway.

Walking around here, one would not guess that access to the  Dresdner is through the butcher shop. This leads to a galleried yard at the back of which stands a small modern restaurant. The cloakroom, where long traditional coats, black hats, and prayer books are left by the tables, gives an idea of the place’s great orthodoxy.

Also worth noting is the excellent  Blue Lagoon. Located in the Diamond District, this is Benelux’s one and only kosher Chinese restaurant.

Antwerp has a large number of butcher shops, bakeries, and stores specializing in typical Jewish products. Be sure to stock up some cakes and pastries at  Kleinblatt and  Steinmetz.

Outside of this area, another stop is necessary. A walk through the area around the sumptuous Royal Museum of Fine Arts will also take you to the sublime  Dutch synagogue. Built by the architect Joseph Hertogs in 1893, it often hosts large ceremonies. Closed for eight years due to renovation, it has been open to the public again since autumn 2022.

Interview of Henri Keesje, member of the Diamond exchange of Antwerp and president of the Belgian Polished Diamond Traders Association (BVGD) 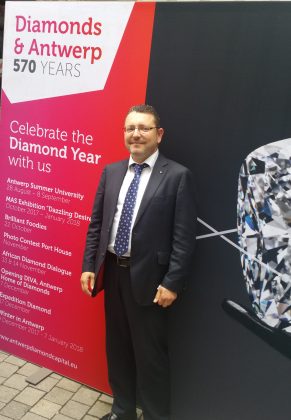 Jguideeurope: We all have the idealized images of Antwerp’s diamond exchange, located on the 100 yards of the Hovenierstraat, with Jews running from office to office or talking on the sidewalks.

Henri Keesje: When they fled the pogroms and the financial difficulties in Eastern Europe at the turn of the century, many Jews headed to Antwerp, one of the main transits, in order to take a boat to the US. Some were able to embark. Others, limited by the migration quotas imposed in America, established themselves in Antwerp where they found job opportunities, mostly in the diamond sector. A generation later, Jews who came (back) after the war kept contributing to the burgeoning industry. Today, we can still find many traces of Jewish life on the streets adjacent to the diamond exchange.

Have the Jews gradually settled in other neighborhoods and chosen more diverse jobs?

If non-orthodox Jews have mostly settled in different neighborhoods, many orthodox communities still live in that area, opening synagogues, groceries, restaurants, among them the famous Hoffy’s, and other businesses. Although the Jewish community of Antwerp mostly originates from Eastern Europe, Oriental Jews have founded the classic “Portuguese synagogue”, which follows a Portuguese ritual, in the heart of the Diamond district. 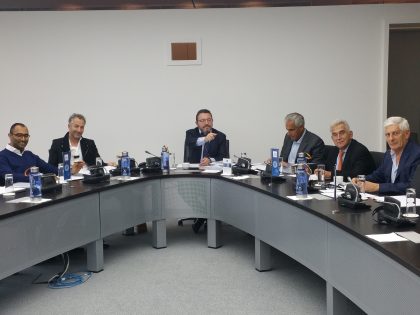 Oriental Jews from Turkey, Lebanon and Syria have also developed communities, when they arrived in the 1970s. Three Sephardic synagogues were also opened recently following the arrival of Georgian Jews in the 1980s. The Habad movement has also developed in Antwerp and surrounding cities such as Edegem and Wilrijk. Youth movements like Hanoar Hatzioni and Bne Akiva remain very active. And, sign of a good integration, Jews practice diverse jobs and are less present in the diamond sector.

Your office is known all over Europe for the commerce and distribution and merchandise and its mastering of colored natural stones. Why have you opted for such a choice?

Apart from the priority to adapt to the digital world, today it’s very important to specialize in a domain. My father was a specialist in the import of rough diamonds, mostly from Africa and Russia. He imported stones and sold them back to manufacturers. When I started in the field, I mostly devoted myself to the finished products and its distribution. Particularly artificial colors using a natural base. I also started focusing on the meticulous invisible setting. What Van Cleef & Arpels applies to rubies is now feasible for diamonds. Just like a puzzle, one can’t see what assembles the stones, rid of golden prongs. It gives a mysterious sense to the object. You can’t distinguish if it’s a single stone or if many little stones were assembled. Financially, both the coloring of diamonds and the invisible settings are way more affordable for the client. 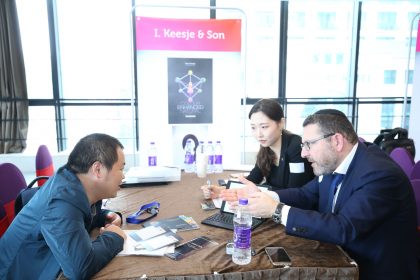 From an outsider’s point of view, the diamond district seems like an island. Are the place and its actors accessible to visitors?

The trade has become more transparent than ever. The AWDC (Antwerp World Diamond Center), the governing body, has played an important role in this evolution. A museum has opened in the center of Antwerp, located at the Grande place. When cruise ships moor in Antwerp, many tourists come to visit our district, the diamond trade being indeed inseparable from the city. Guided tours of the trade and the Jewish community have flourished. After making a request to the AWDC, one can easily obtain the right to see the inside part of the district and even register for courses in gemology. Sometimes, I also introduce our trade and district to students and tourists.