It seems that the Jewish presence in Geneva dates from the 13th century, mainly around the  Place du Grand-Mézel in the old town. The Jews were expelled from the city in 1490 and forbidden to stay there until the 19th century.

The Grand-Mézel was the oldest closed Jewish quarter in Europe, established in 1428 (88 years before the Venice ghetto). The old town is situated on a small hill, with the shopping streets on one side and the university and cultural buildings on the other. Coming down from the Grand-Mézel, 200m away you will find the historic synagogue of Geneva.

Reestablished in 1852 by Alsatian Jews, the Jewish community of Geneva was offered a plot of land by the city to build a synagogue as a sign of tolerance toward non-Protestant minorities. 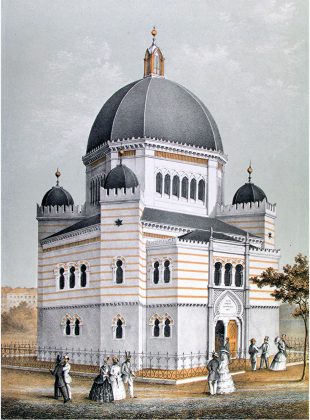 Located at the Place de la Synagogue and combining eastern style with Polish characteristics, the  Beth Yaakov Synagogue was returned to its original colors in 1997: designed in 1857 by Jean-Henri Bachofen, it features a gray and pink-striped facade, four crenellated turrets crowned by domes, and a central dome topped with the Tablets of the Law. The interior (arches and dome) is predominantly light blue, while the stained-glass windows and paneling add to the vividness of the colors.

The University of Geneva was established in 1874, relatively late compared to other Swiss institutions. The urgent need to fill lecture halls unexpectedly benefited from the political upheavals in Eastern Europe. The very reactionary period of the Russian Empire forced many students to leave the country and find places at Western universities. This was especially motivating for women, who found free access to Geneva universities, a rare event at the time. Thus, Jews from the East, often from very modest conditions, made up more than half of the students in Geneva. Among them, Lina Stern, a world specialist in the brain and the first woman professor at the University of Geneva. But also Chaïm Weizmann, the future first president of Israel, who taught chemistry there and founded a publishing house. There he developed with other students the idea of what would become the Hebrew University of Jerusalem. As well as many Zionist, communist and Bundist figures.

In the spirit of reconciling studies and manual labour, Aron Syngalowski established in 1943 in Geneva the provisional headquarters of the ORT (Organisation – Reconstruction – Labour), founded in 1880 in Russia to help needy Jews. This world headquarters remained in Switzerland until 1980.

The Heikhal Haness Synagogue, serving the Sephardic Jewish community, was built in 1970. This marble construction was needed in answer to changes in Geneva’s community, as Mediterranean Jews have now become the majority.

The GIL – Communauté juive libérale de Genève created by Rabbi François Garaï in 1970, gathers today about a third of Geneva’s Jews. It was the first synagogue in the french speaking world to have the girls read the Torah during their bat-mitsvah.

City known over the world for its diplomatic summits, Geneva inspired many writers, among them Romain Gary and Albert Cohen, diplomats themselves. A wonderful tribute to the city is shared in Albert Cohen’s novel Mangeclous when the Solal cousins stroll around the sights and parks and turn the UN upside down.

Albert Cohen arrives in Geneva to pursue his studies. He became a Swiss citizen and was admitted to the Geneva bar. Following his elaboration of the passport for displaced persons, he will return to the city in 1947 to head the Protection Division of the IRO. Geneva will be the city where Cohen’s work confronts generations and discomforts between them. First of all, between him and his mother, who, like his character Solal, is ashamed of her origins and the characters who represent her too “loudly”. He will cry for these moments of shame in The Book of My Mother and will mock his own attitude in Mangeclous, the main character of this novel and who bears the same name causing a great commotion in the city and the highest UN authorities, by setting himself up as an emissary of the creation of the State of Israel.

Interview of Anita Halasz, Cultural Director of the Jewish Community of Geneva

Jguideeurope: Which place in Geneva, linked to Jewish heritage, has left a special mark?

Anita Halasz: Several, of course. The place in the Old City where the first strictly closed Jewish quarter in Europe is located is particularly interesting, because, contrary to what is often written in European historiography, the famous Venice Ghetto, created in 1516, was not the first of its kind in Europe. The primacy went back to the city of Geneva, which, 88 years before the Serenissima, and strictly applying the coercive provisions of the 1215 Lateran Council, created it in 1428, under the name “Cancel”. Let us also mention the Jewish cemetery of Veyrier, the only cemetery in the world that is crossed by a political border…

I would like to point out a particularly problematic aspect in Geneva: the authorities generally do very little to promote Geneva’s heritage, including local Jewish heritage. Thus, there are no commemorative plaques to guide the visitor, who is often forced to undertake research or hire a guide to link a given place to Jewish history or, more broadly, to Geneva’s history. The historian Jean Plançon and I founded the Geneva Jewish Heritage Association in order to make this rich heritage more accessible to the general public, notably through a website containing a wealth of information and regular newsletters.