The medieval rue des Juifs is the present-day  rue du Docteur-Fanton. As in Aix-en-Provence, the Jewish quarter was totally transformed and integrated into the town after the expulsion of the Jews from Arles in 1493. This prefigured the expulsion of all the Provençal Jews in 1500-1501.

The Museum of Old Arles (Musée de l’Arles Antique) holds two funerary inscriptions. On the first we read: “This is the burial place of Juda, the young son of Rabbi Mardochée. May the spirit of he who never sinned rest. May he abide in Eden”. The second indicates that “This is the sepulcher of our master Meir”.

The Museon Arlaten, a museum devoted to folk art and traditions, has a number of Jewish objects from the Provence region. 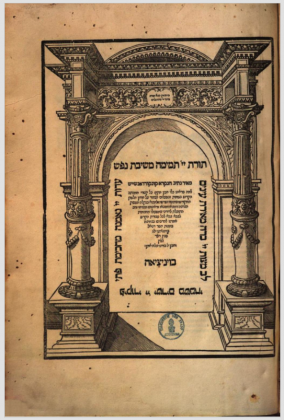 Episcopal hagiographic quotes from Arles from the 5th and 6th centuries attest to the presence of Jews at that time in the city of Arles, as Danièle Iancu-Agou indicates in her book Provincia Judaica: Dictionary of historical geography of the Jews in Medieval Provence. Legend has it that Jews settled there shortly after the destruction of the Second Temple in Jerusalem.

Benjamin de Tudela noted in his Notebooks in 1165 the apparent antiquity of Jewish life in this city. 200 Jewish families lived in what is most likely one of the oldest Jewish communities in France.

Texts by Isaac ben Abraham ha-Gorni, dating from the end of the 13th century, evoke in a poem the reception which was extended to him by the Jews of the city. Another prominent written reference is the work Eben Bohan by Kalonymos ben Kalomynos (1286-1328) which evokes this community and the people who make it up.

Texts evoke the presence of a synagogue in 1315, near the rue Neuve. It is said to have suffered a fire in 1459, but was subsequently repaired. The texts of the time also mention the place given to the education of poor children and the mission that this symbolized for the community.

If we cite numerous texts here, it is also because the intellectual and scientific life of Jewish families was very developed at the time in the region. Whether it is the Avigdors and their Hebrew translations of the works of Montpellier, the Bondion of Saint-Paul, the Borrians, the Vitalis and the Nathans, mainly Isaac Nathan, author of treatises.

Astonishing anecdote, of the 43 Jews registered in the Arles land register, 22 own vines. Most of them are located in the rural district of Les Fourches.

Several ancient Jewish cemeteries are listed. The oldest, located on Montjuif, was used until 1376, and the other, at the current intersection of rue du Marché-Neuf and rue de la Rotonde, until 1434.

The second half of the 15th century was much more complicated for the Jews of Arles. In addition to the manifestations of violence of 1436, 1480 and 1484, the Jews also suffered a charge of ritual murder in 1453. Families fled at that time to Tarascon and expulsion was notified in 1493. Jews tried to settle there in again a few years after the expulsion but suffered the same fate.

After the emancipation of the Jews following the French Revolution of 1789, some Jews returned to Arles. An attempt to establish a new synagogue has been attempted in recent years.