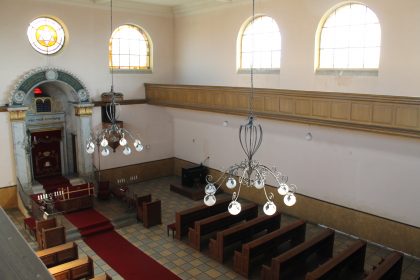 The first mention of a Jewish family in Brumath dates back to 1562. Documents from the end of the century mention the presence of a Jew named Susskind. In 1693, 4 Jewish families were registered in Brumath and, in 1766, their number rose to 9.

The French Revolution gave Brumath, as in the rest of the country, access to citizenship for Jews. This allowed the Jewish community not only to settle but to grow, becoming one of the largest in the region, with a rabbinate that also served the surrounding communes. As in most towns in the region, this number declined following the defeat of 1870, as a large part of the Alsatian Jews preferred to remain French.

The  synagogue was built in 1845, in place of an old house of prayer. And two years later, the Israelite school, with a class for girls and one for boys. During the German occupation, the synagogue was damaged and desecrated. In the post-war years, it was first used as a food store.

Renovated in 1957, it was then re-inaugurated and returned to worship. At that time, there were about a hundred Jews in Brumath. Since 1998, a possible project to transform the synagogue of Brumath into a center for the conservation of Alsatian Jewish heritage has been discussed, given the numerical decline of the community and its uncertain future as a place of worship.

The synagogue occasionally opens its doors to visitors, as was the case, for example, on the eve of Sukkot in 2021, when a succah was built in its courtyard for the occasion.

In 1880, a  Jewish cemetery was established, as burials had previously taken place in the Ettendorf cemetery. It is located 1 km outside the village. In 2004, 92 graves in this cemetery were desecrated, causing a wave of indignation throughout the region.