The South is very different from the rest of the Italian peninsula because of the Jewish presence that was brutally interrupted by the expulsion of 1510, as this is reflected in the rather small archaeological heritage.

The Orthodox Jewish community today does not exist as such in Calabria, as there are few practising Jews and a few dozen are on their way back or converting to Judaism. For this reason, Calabria depends on the community of Naples, but it is rich in Jewish history. However, a new breath of fresh air has come from the United States thanks to a progressive Jewish woman, Rabbi Barbara Aiello, an American-Calabrian, who is determined to contribute to the resurgence of the anusim, the descendants of the Jews of the south who were forced to convert at the beginning of the 16th century. In 2007 she created the Ner Tamid (Eternal Light) synagogue in Serrastretta (province of Catanzaro), with the aim of reviving this Calabrian Judaism that has existed for centuries in a latent state and that was just asking for it under the southern Italian sun.

A historical presence that is currently documented, for the various Calabrian localities, by the blog and Facebook page, Jewish Calabria – Cultura e retaggio ebraico.

Of all this Calabrian history, we recall that Shabbetay Donnolo, a famous physician and philosopher, operated in Rossano around the year 1000; that in Reggio Calabria, on 5 February 1475, Rashi’s commentary on the Pentateuch was printed, the first work in Hebrew with the date indicated. Moreover, the parents of the great Kabbalist Hayim Vital, known as “il Calabrese”, came from the region.

Nowadays, in the province of Cosenza, there is Ferramonti, the remains of the concentration camp for foreign Jews, built during the last world war. On the Cedar Coast (between Tortora and Cetraro, concentrated around Santa Maria del Cedro), every year in August, rabbis from all over the world come to harvest the excellent Calabrian citrus fruits that are an integral part of the Sukkot celebrations.

In Cosenza, for the recurrence of the Jewish Festival of Lights, a majestic candelabra is publicly lit in Largo Antoniozzi, in the historic centre, near the old Jewish quarter. In addition, the Calabria Kosher Food Festival was inaugurated in 2019.

A curiosity: in Reggio Calabria, the tourist can walk along a beautiful street dedicated to Aschenez (great-grandson of Noah) who, according to a legend, founded this beautiful city that looks out over the Mediterranean.

Interview with Vincenza Triolo, curator and creator of a website dedicated to Calabrian Jewish heritage. 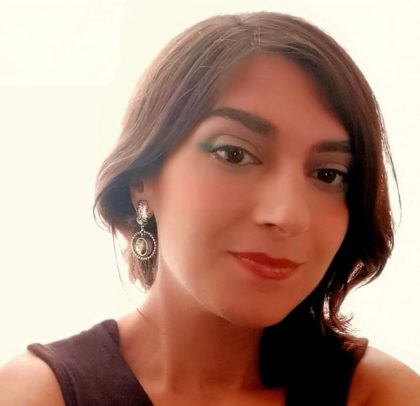 Jguideeurope: Do you think that there is a renewed interest in the Jewish cultural heritage of Calabria?

Vincenza Triolo: Yes, certainly. However, we must also note that in some cases it is nothing more than a passing curiosity and, unfortunately, in others, we can see phenomena of cultural marketing, the search for a new regional business whose profits would go to the usual characters who exploit the resources of the region to the detriment of all those who wish to intervene honestly in the territory.

When did this revival begin?

In the last two decades or so, the activities of promotion, diffusion and valorization of the Calabrian Jewish culture and cultural heritage have intensified. The publication of new researches has favored an awareness of the Jewish presence in Calabria over the centuries and, consequently, of its impact on the history and the destiny of Calabrian villages.

What prompted you to create the site and what does it offer?

In 2013, when I saw, for the first time, at the Antiquarium of Leucopetra, the oil lamp (“lucerna”) with its printed Menorah, I had a strange feeling of familiarity with this object. This is what made me go in search of something, without knowing what exactly. I myself am a researcher and an expert in the field of cultural heritage, and it wasn’t long before I made discoveries about the Jewish cultural heritage of Calabria. Thus, I was contacted by Dr. Roque Pugliese, responsible for the District of Calabria for the Jewish Community of Naples within the UCEI, with whom I started to collaborate. The need soon arose to start a blog and web pages where I could work within the rules, but without restrictions for the needs of others. Thus was born the blog “Jewish Calabria – Jewish Culture and Heritage” to share all possible information in this field. My main goal was to make the local population aware of the contribution of the Jewish culture to the Calabrian identity, but also to contribute concretely to revive the Jewish presence in Calabria, and to break the prejudices.

What little-known part of this heritage deserves more attention?

It is difficult to answer. In fact, I believe that all the sites of cultural interest deserve it, as well as the objects linked to the cultural heritage exhibited in the various Calabrian museums or the remains of ancient Jewish quarters (“giudecche”). My website offers ample presentations (also in French) of all the sites currently listed and my Facebook page gives almost daily information, in Italian, on all the discoveries and events concerning the Jewish presence in Calabria (and in various regions of Italy).

Can you share an anecdote with a visitor that particularly moved you?

The most beautiful anecdote is related to a visit of a lady in Bova Marina, in the Archaeological Park of “San Pasquale”, where the remains of the ancient Synagogue remain. This lady, after a guided tour, told me: “Thank you, here my soul felt particular vibrations; I felt at home”. These words moved me enormously!