The Merseyside city of Liverpool can proudly claim to have been home to northern England’s largest Jewish community in the nineteenth century.

Today, the community centers around Wavertree, location of the city’s Jewish cultural center at Childwall Road.

Liverpool boasts one the Britain’s finest  synagogues. Consecrated on 3 September 1874, the building on Princes Road is particularly admirable for its late Victorian interior. Be sure to call ahead before attempting to visit.

Jews have probably first settled in Liverpool early in the 17th century. Only 20 were registered there in 1790. In 1860 that number rose to 3000. At the end of the 19th century, some of the Polish and Russian refugees, on their way to the United States, settled in Liverpool.

A Sephardi community from the Levant also settled there in that era. A Liberal synagogue was built in Liverpool in 1928. The  Greenbank Drive synagogue presents architectural interests. But the most famous synagogue is the one located at Princes Road, famous on a national scale. In the beginning of the 20th century, a yeshiva, a school and social services were made available.

Participation of Jews in the development of the city

Grateful for the warm welcome and the access to all levels of society, much more than in most other English cities, Jewish refugees vividly encouraged their children to integrate, first and foremost through school, and participate in the radiance of the city. Which explains the great number of local public figures, politicians (among them a few mayors), lawyers.

Among the biggest contributors to the city’s heritage are two major families : Lewis and Cohen. The Lewis family being best remembered today for the department store founded by entrepreneur David Lewis,  operating from 1856 until 2010, carrying their name (on which stands the famous statue by Jacob Epstein celebrating the resurgence of Liverpool after World War II).

Also important to the city’s development, the Cohen family, whose name was given to the library of the University of Liverpool. Those two families have financed many local institutions.

Among the Jewish personalities of Liverpool, we can mention zionist leader Samuel Jacob Rabinowitz, the future Chief rabbi of Israel Isser Yehudah Unterman.

And of course Brian Epstein, the famous manager of the Beatles who discovered them in a small club and was their driving force through their fabulous rise. Cynthia Lennon regretting the fact that Brian’s part in their success was much underestimated. 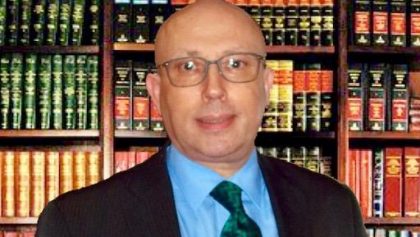 Jguideeurope: What is the role of the MJRC and its future challenges?

Howard M Winik: MJRC (Merseyside Jewish Representative Council) is the umbrella organisation of the community and provides leadership for all Jews of Liverpool, Wirral, Southport and Chester, whether Orthodox, Reform, Masorti or unaffiliated. We currently have around 3000 members, of all ages and a well established infrastructure including synagogues, schools, a dedicated Jewish welfare hub and a care home. In addition, there are several local universities and we provide activities for every age group. Our numbers reflect employment patterns over the past 20 or 30 years, when many younger people moved to London and elsewhere to find work, although the area has undergone significant regeneration recently and, at present, our local population is fairly stable numerically. There has been considerable investment in the science and biotechnology sectors which are attracting people into the area, so we are very upbeat about the future.

That said, we are entirely self-sufficient financially and our main challenge is maintaining the resources to fund the services we provide.

How is the Jewish heritage shared in Liverpool?

We encourage people to visit our museums – there is an excellent section at the Museum of Liverpool (close to the cruise terminal) describing the history of the once large Jewish community that lived in the centre of the city. Visitors can also book a tour of one of our local synagogues and Liverpool Old Hebrew Congregation, in Princes Road, boasts a magnificent, Grade 1 Listed building, decorated in the baroque style, which is one of the finest anywhere. It is also near to the Pier Head and City Centre. A number of local Jewish cemeteries are open to visitors too and the  Deane Road grounds have been fully restored and is of particular historical interest (contact Princes Road Synagogue for details). Liverpool also has a Chabad Centre and an active student chaplaincy. We have deposited large archives of historical material with the City of Liverpool. Specific enquiries should be directed to the local records officer, museums or to our community office at Shifrin House, (+44 151 733 2292).

Is the Beatles Museum devoting an important part to Brian Epstein’s influence?

There is a considerable amount of information available about the Beatles, the Epstein family and the history of pop music in the museums and elsewhere.

Brian Epstein is buried in the Greenbank Synagogue,  Long Lane Jewish cemetery in north Liverpool (visits, by appointment only) and we encourage people to take a Beatles heritage bus tour too.

What important special event celebrating Jewish heritage will happen in Liverpool this year?

There are meetings and events throughout the year. Please go to www.liverpooljewish.co.uk, or contact Shifrin House for further details. Regular services are held at our synagogues, including Sabbath and Festivals (security checks may apply).

The annual and colourful Civic Service will be held on Sunday, 8th March, 2020, at Princes Road Synagogue, commencing at 3pm and will be attended by the Lord Lieutenant (Queen’s official representative), Lord Mayor of Liverpool and mayors of surrounding areas, judges and civic heads. All are welcome.