Interview with Géraldine Roux, doctor and teacher in philosophy and Director of the Rachi Institute, concerning the European Heritage Days

Jguideeurope: What event will open the European Heritage Days?

Géraldine Roux : A concert, free and open to all, specially designed for this event will open the European Heritage Days on the evening of 17 September, by the vocal ensemble La Compagnie des Humbles. The specificity of La Compagnie des Humbles is to offer concerts based on the research carried out by the Aube Musique Ancienne association to discover a rich and little-played repertoire from the Renaissance to the Baroque, updating musical scores, putting them online free of charge to pass on this heritage to as many people as possible, and organising concerts to bring these works to life.

The Compagnie des Humbles will therefore propose, in the conference room of the Rachi Institute, a memorable evening under the sign of Universal Harmony, in reference to the eponymous musical treatise written in 1636 by Marin Mersenne. This musical production will allow the public to hear Catholic, Protestant and Jewish music from the 17th century with extracts from works by composers from the Auvergne such as Pierre Bouteiller and Nicolas Metru, Johann-Sebastian Bach, Claudio Monterverdi, Girolamo Kasperger and, for the first time in Troyes, a performance of Psalms set to music by Salomone Rossi, an Italian Jewish violinist and composer from the early 17th century. A discovery under the sign of “Sustainable Heritage”, the national theme of these days this year! 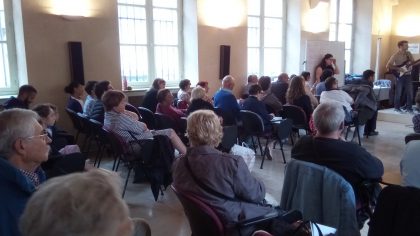 What other main events will be organised during the Days?

In addition to the concert on Saturday evening, there will be many events on Sunday, including two conferences. The first, in the morning at 10:30 am, will be given by me, on the theme Discovering fantastic beings in the Bible and the Talmud, in search of the Golem and the land of the giants, from Leviathan to the Behemoth and the Na’ash. Most of them have disappeared and yet haunt the pages of the Torah and the Talmud with their silent, disturbing or burlesque, melancholic or droll presence. Depending on the interpretation. This lecture is intended as a journey into the other side of the world with the help of the Midrash, the Talmud and Rashi’s commentaries.

The second lecture will take place at 4 p.m. on “The Dreyfus Affair: a gallery of portraits from the Champagne region”, by Jean-Michel Pottier, lecturer in French literature at the University of Reims Champagne-Ardenne, member of the Zola group (CNRS-ITEM) and who has been teaching for the past three years, at the Rachi Institute, the only course in France entirely devoted to the Dreyfus Affair, for students of the History degree and the Master’s degree in Heritage and Book Studies at the University of Reims Champagne Ardenne. This conference will focus on how Champagne was directly or indirectly involved in this affair. 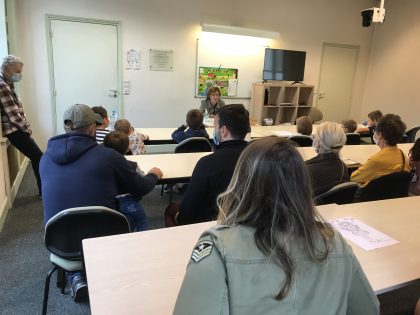 A reading of Mediterranean tales, for children from 5 years old, will be proposed by Evelyne Rousseau, accountant at the Rachi Institute. Michel Degardin, a volunteer, will be present throughout the day to introduce the public to our library, mainly Hebraica, with its 8,000 volumes, and the exhibition “Rachi and the Jews of Troyes in the Middle Ages” can also be visited throughout the day, for the first time in a dedicated place. All these meetings will of course be free and open to all.

Do you observe any organisational changes compared to the pre-Covid period?

During the two years of Covid, the Rachi Institute was able to participate in the European Heritage Days, without interruption, but the organisation was indeed quite heavy with the gauges to be respected, the sanitary measures and then the health pass. Volunteers spontaneously offered to help us so that we could be present at this important moment of the beginning of the Rachi Institute. So, in a way, this organisation was able to show a real surge of solidarity but with a much heavier structure and a much greater legal and ethical responsibility than in previous years. 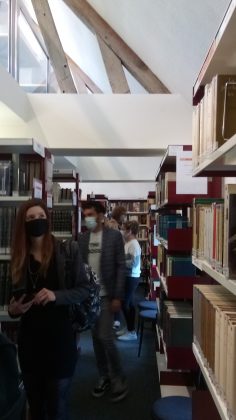 Could you share a personal anecdote about a highlight of a previous festival?

I have a very strong memory of the 2019 edition of the European Heritage Days. The national theme was “Arts and Entertainment”. Thomas Schauder, a philosophy teacher and, at the time, part-time librarian at the Rashi Institute, offered to close the day with his group of singers and musicians “Les Clés de Scène”. The Rachi Institute was then organising a concert for the first time on the occasion of these Days and, as the speciality of this Savinian musical group was to organise amateur shared stages, jams, we had all thought of organising the concert in the courtyard of the institute, hoping for good weather… It was pouring with rain!

Tucked away in the conference room, the group started to play and, an afternoon concert that was supposed to last an hour, ended at more than 8 pm, with people from the audience coming on stage, some with a guitar, some with their voice, one person even with a violin to sing together French music but also in Hebrew and Yiddish. All together, even those who did not know the language. All together carried by the music. A magical, intense moment. Out of time.

For more information about the Institute’s programs, follow this link: https://institut-rachi-troyes.fr/