Thanks to its geographic position and the presence of Brindisi, Otranto, Bari, Trani and Barletta ports, Apulia has been a transit point for many Jewish exiles -most heading to Israel. This crossing point therefore made of Puglia a privileged region for the Western Europe diaspora.

The first evocation of a Jewish presence in Puglia was written by Rabbi Akiva (17-137): en route from Jerusalem to Rome to plead the cause of the Jews of Jerusalem to the occupant, Akiva made a stop in Brindisi as mentioned in his diary.

Not all the Jews who settled in Apulia arrived directly from Palestine, as refugees from Jerusalem. Some arrived by sea from the Balkans, others from Spain and Portugal, or overland from France, Central Europe and other parts of Italy. In Apulia they assimilated with existing groups, creating a Judaism with its own unique profile.

Jewish culture in Apulia, whose legacy is today primarily known in areas outside Italy’s peninsula, was highly esteemed in the Middle Ages. The twelfth-century French rabbi, Rabbenu Tam, compared Bari and Otranto to Jerusalem, paraphrasing Isaiah 2.3: “From Bari the Torah will come out and the word of God from Otranto.”

Traces of Jewish multiculturalism in Southern Italy are everywhere evident in the collection of annotations of the Pentateuch known as Sefer ha-Yashar (Book of the Righteous), that is believed to have been compiled in Naples in the late fifteenth century from pre-existing materials – the authors taking their cue from the narrative sections of Genesis and Exodus, to tell parallel stories that occurred in other periods and areas. One of the central themes of this work is the migration of peoples. It explains, for example, that the population of Apulia and Italy all originate from biblical figures; and that Aeneas – the founder of Rome – was closely related to the patriarchs. Their tendency to draw parallels between different cultures shows that the Jews of Southern Italy were not closed to the traditions of other peoples, and that their ability to adapt was considerable.

An interesting illustration of the kind of multiculturalism that distinguished Medieval Apulia can be found in the decorative plan of the mosaic floor of Otranto Cathedral – the work of a twelfth-century Byzantine monk. The author fused elements drawn from the Bible and other Jewish narratives (similar to those that make up the Sefer ha-Yashar), elements that are rooted in a multi-ethnic culture, where Neo-platonic and Aristotelian traditions coexist with mythological material derived from Celtic folkloric literature. Realized during the Norman Era, this work is a tribute to the great Byzantine capacity for cultural synthesis that the new rulers sensibly adopted – doubtless to safeguard the diverse heritage of their newly conquered territories.

As time passed and dynasties succeeded one another, the centralization of culture in the capital led to a weakening of Jewish culture in the peripheral areas of the kingdom. This phenomenon may also be associated with instability due to socio-political feuds. The social composition of the community continued to change. At the time of the transition of power from the Byzantines to the Normans, many Jews migrated to northern Italy and from there to the Rhineland, where they contributed to the formation and enrichment of Ashkenazi liturgical and philosophical traditions.

After World War II, Apulian Judaism got a new lease of life for a few years between the end of the conflict and the establishment of the State of Israel, when thousands of Jewish refugees from central and Eastern Europe and the Balkans, mainly survivors of Nazi concentration camps, stayed in the transit camps managed by the United Nations. To prevent them from reaching Palestine, the Allied Forces temporarily relocated them to Santa Maria al Bagno, Santa Maria di Leuca, Santa Cesarea, Tricase, Bari, and Barletta where they immediately recharged community organizations, religious schools and political institutions. Source : Fabrizio Lelli, « Judaism in Puglia as a Metaphor for Mediterranean Judaism »

Interview of Sara Brownstein, head of HaShorashim, which organizes trips to Europe and in Israel, enabling to reconnect with Jewish cultural heritage, and who recently organized a big trip to the region of Puglia. 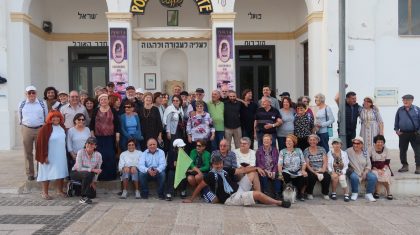 Why did you choose to travel to the region of Puglia?

We’re always interested in traveling « back in time » and find traces of a Jewish presence somewhere. We had proof through our texts of a Jewish presence in Italy dating more than 2000 years. Yehuda Makabee (of whom we celebrate the victory over the Greeks in Hanukka) had sent there his brother to negotiate the support of Rome for his rebellion against the Greeks. Traces from that era of numerous communities can be found in the South of Italy. What attracted us was the possibility of building, as we enjoy doing, an itinerary in a not well known region, off the beaten tracks, far from the cities of Northern Italy and their Jewish ghettos such as Rome and Venice who are much more touristic.

This region is also where an entire village of Italians converted to Judaism in an era which witnessed the rise of fascism. The Jews of San Nicandro inspired many books. We have by the way visited their descendants, quite an emotional encounter.

The lesser known regions are challenging for those who only eat kosher food, because no structure exists capable of accomodating their needs. Which is why we went their ahead, in order to scout places and organize the logistics. We were marveled by the landscapes and the kindness of the inhabitants who are often « snobbed » by their fellow countrymen of the North. We thus had the winning ticket to start our trip. 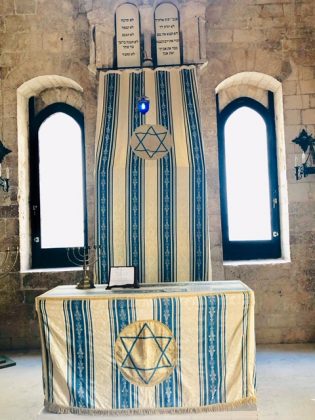 How was your stay there?

As I said, the people were very welcoming and deeply moved by the number of persons we brought. They’re not used to see so many tourists. Being a group of 60, it was quite hard sometimes to accomodate us all, whether on a boat, during the visit of a museum or at a restaurant which accepted to let us “kosherize” its kitchen for the event. They were all proud to show us their region. We have centered our visits, as we usually do, on the theme of the « lost tribes », on the footsteps of our Jewish brothers, which is the common thread of all our trips. But we also visit the unmissable sites, as here in Puglia with places like the little town of Alberobello, worthy of tales and legends or the magnificent caves of Castellana.

We have been subjected to a lot of attention. The Italians, at least the ones we met, are mostly traditional and regular churchgoers. Families go to the mass together and then stroll down the street in arms, all generations alike to enjoy an ice cream. When they asked us where we came from and heard that itw as Israel, they were very moved. Travellers coming from the Holy Land! We have by the way kept in touch with our hoteliers and guides. 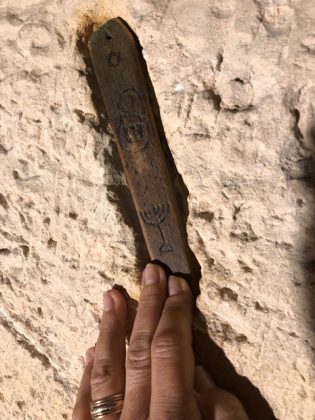 Which place had a particular impact upon you?

The shabbat service in the synagogue of Trani, built in 1234, was a particularly strong moment. We had invited the descendants of Jews of Trani and Lecce to join us for the office and lunch.

The story that was told us concerning the local Jews during the Holocaust was also very emotional and surprising. While the Allied forces move up from the South to the North of Italy, soldiers liberated the internement camps, among which Ferramonti. Thousands of Jews were left on the road. The Jewish Brigade which came from Palestine (then under British mandate) who fought alongside the English forces, had received the order to regroup them. Thus, men, women and children in a precarious state of health were split in four small villages of fishermen far in the South of Puglia.

Their inhabitants, simple and generous persons, welcomed them, sharing the rare bits of food they had and offering the human warmth they so much needed. We were lucky to encounter a man who was 8 years old back then and who remembered that era very well. A nice museum in Santa Maria Al Bagno shares that incredible story.

Is the cultural and historical Jewish heritage well preserved in this region?

Puglia has kept the memory of Jewish presence. A fascinating museum in the city of Lecce traces the journey of this ancient community. It was created by a non-Jewish university professor who explains all the details of our history. 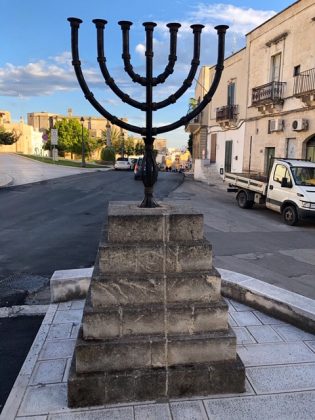 Another Italian man has found, while his house was being fixed, ruins which he couldn’t identify at forst hand. After having done some research on the history of his town, Manduria, he understood that his home was actually a former synagogue with mikveh dating from the Middle-Ages. His transformed his home in a museum and is glad to welcome visitors to explain them the history of the Jews during that era.

It must be highlighted that certain small villages in the deep parts of Puglia and Sicily maintain traditions which seem very close to ours, like the way they cover mirrors of the home of a deceased person for 7 days.

What are the next trips you envisage in Europe?

We have a strong demand to organize again trips in Portugal and Andalusia. Every new destination requires a important amount of work scouting the area, many months of research to deliver historical explanations during our stay but also to enable our participants to “relive” the history of those communities. If among those trips we manage to find some time, Sicily could also be one of our next ones. A fascinating destination where traces of Jewish communities from 2300 years can be found. But everything can change. A single testimony of an inhabitant about a tradition which reminds us of our ancestors can open other horizons and launch our program HaShorashim (our roots) in new adventures!