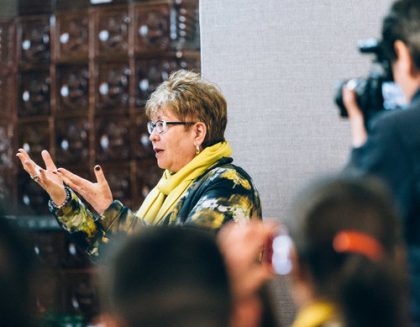 Jguideeurope: What will be the main theme of this year and what events are organized around it?

Peninah Zilberman: This year theme is “RENEWAL”. Concerts, plays, debates and lectures are organized, all in the local languages and linked to local objectives.

Can you share a personal anecdote about a previous event?

It’s always very moving when during program some people suddenly discover their Jewishness – as they hear a tune whispered by their grandmother, enjoy a specific type of food reminiscent of childhood gatherings around family dinners. Or when they hear a story about what happened since after WW II and the entering of the Communist regime. Due to their policies, many Jews decided to go undercover and not practice their religion, which was not part of the Communist principles. Many of these parents crossed the world with their secrets.

Which particular place related to Romanian Jewish Heritage do you feel should be better known?

Oh, Steve that is a very hard one… Let me say that there is almost no village, town or city that Jews didn’t live in. Unfortunately, many are today “Judenfrei and Judenrein”, Nazi terms which designated an area that has been “cleansed” of Jews during the Holocaust. In many locations across Europe, the Nazi were successful with their “mission”. Therefore, tourists visiting locations across Romania should look and ask for the local Jewish Cemetery, light a Yizkor candle since no one visits there, or walk into a synagogue. Even if synagogues are sometimes transformed into concert halls, tourists can admire the artwork… and maybe say a prayer.